Remember ME - You Me and Dementia 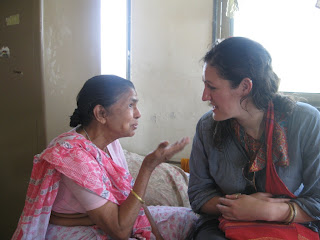 
Forget yourself for others, and others will never forget you.
Posted by Sailesh Mishra at 3:37 PM No comments:

Together, we all have the power to prevent elder abuse

My World…  Your World…Our World…Free of Elder Abuse
Forget yourself for others, and others will never forget you.
Posted by Sailesh Mishra at 6:21 PM No comments:

Papamma, a Elderly domestic worker in Bangalore, took her employers to court and managed to receive a favourable judgment. This is a historic victory for perhaps the most vulnerable segment of unorganised workers, made possible by the support of a trade union, a dedicated team of advocates and a labour officer who adjudicated objectively.

Forget yourself for others, and others will never forget you.
Posted by Sailesh Mishra at 3:17 PM No comments:

The Indian Supreme Court, on May 12, 2011, threw out the curative petition filed by the Central Bureau of Investigation (CBI) seeking enhanced punishment for top officials of Union Carbide, the multinational at whose Bhopal plant an accident led to a massive leak of poisonous gas that killed over 4,000 people instantly and disabled many thousands more.
The deadly leak occurred on December 4, 1984. Compensation for the victims, negotiated by the Government of India, was paltry by any standards and has been hotly contested for more than 25 years by groups fighting for the victims. In a 1996 judgment, the Supreme Court diluted charges against the accused from Section 304 (II) of the Indian Penal Code (culpable homicide not amounting to murder) to Section 304 (A) (criminal negligence). In 2010, a Bhopal court convicted seven accused who were sentenced to two years in jail. All seven secured bail immediately. The then Union Carbide Chairman Warren Anderson, also accused in the case, was declared a fugitive in 1992.

The sessions court verdict and sentence was criticised strongly by civil society and the media, and a group of ministers was set up to look more closely into the matter. The GoM recommended stricter punishment for the seven officials. The CBI filed a curative petition against the light punishment and sought direction from the SC for framing of charges against the accused for culpable homicide not amounting to murder that carries a maximum imprisonment of 10 years (curative petitions have only been allowed since 2002).
A five-judge bench including Chief Justice of India S H Kapadia dismissed the CBI’s petition saying it was based on a “wrong and fallacious plea”, and filed after 14 years. It said there was not enough reason to build a case of culpable homicide. “The materials produced do not meet the requirement (for homicide),” Kapadia said.
However, the court said that its 1996 judgment in no way prevented the trial court from framing charges under the stringent provisions of the Indian Penal Code.
It said the Bhopal sessions court was free to examine the charges against the accused and decide, if the evidence available so warranted, that they could be tried for a more serious offence such as culpable homicide not amounting to murder. The SC bench clarified that the 1996 judgment was based on evidence presented before it at that time, and it was wrong to assume that it was binding on the trial court when additional facts and material were forthcoming.
On May 13, a day after the SC judgment, the Indian government said it would ask the CBI to move the sessions court in Bhopal for an early hearing of its revision application and appeal filed by the Madhya Pradesh government for stricter punishment for the accused.
Source:  http://infochangeindia.org/environment/news/sc-denies-plea-for-enhanced-punishment-for-bhopal-gas-tragedy-accused.html

Forget yourself for others, and others will never forget you.
Posted by Sailesh Mishra at 3:10 PM No comments:

Regulation of Surrogate Parenthood in India

The advances in human reproductive sciences have made it possible for couples and others to have biologically their own children who otherwise cannot for a number of reasons. This has given rise to the concept of surrogate mothers. Surrogacy is a method of assisted reproduction. More common form is IVF/Gestational surrogacy in which the surrogate child biologically belongs completely to the social parents. The other type is gestational surrogacy where the surrogate child is genetically related to the male parent and the surrogate mother.

India has emerged as a favourable destination for surrogacy and its Assisted Reproductive Technology (ART) industry has evolved into a 25-billion rupee business annually, with Law Commission describing it as “a gold pot”. The phenomenal rise in surrogacy in India has been due to it being cheap, socially accepted. Moreover, surrogacy has emerged as a preferred option because of complicated adoption procedures.

Foreigners including NRIs seeking surrogacy for various reasons, both medical and personal, have also contributed to the rise of the Indian surrogacy industry predominantly because of it being at least ten times cheaper than in their respective countries. No statistics exist on the number of foreign couples coming to India to have a child. But ART clinics say that their numbers have been appreciably growing.

In India surrogacy heralded with the delivery of its first surrogate baby on June 23rd, 1994, but it took eight more years to draw world attention to it when an Indian woman in 2004 delivered a surrogate child for her daughter in the U.K. Surrogacy as a medical process has matured over the years. India has become a booming centre of a fertility market, partly surreptitiously, and today there are an estimated 200,000 clinics across the country offering artificial insemination, IVF and surrogacy. They call it Assisted Reproductive Technology (ART).

There is at present no law governing surrogacy in India, eventually the activity including renting a womb (commercial surrogacy) is considered legitimate. In the absence of any law the Indian Council of Medical Research (ICMR) in 2005 issued guidelines for accreditation, supervision and regulation of ART clinics in India. But the need for legislation became pressing with ICMR guidelines being often violated and reportedly rampant exploitation of surrogate mothers and even cases of extortion.

At the instance of the Indian government an expert committee has drafted a legislation known as Assisted Reproductive Technology (Regulation) Bill, 2010 for legalizing surrogacy. The proposed legislation earlier floated in 2008 envisages legalizing commercial surrogacy as well. It defines a ‘couple’ as two persons living together and having a sexual relationship and as such, following Delhi High Court’s verdict on homosexuality, gives gays besides the singles the legal right to have surrogate babies. It also stipulates the age of surrogate mother to be within 21-35 years and limits her deliveries to five including her own children. The surrogate mother will have to enter into a legally enforceable surrogacy agreement as per the proposed legislation.

Foreign couples including NRIs seeking surrogacy in India will have under the proposed law to submit certificates that their country recognizes surrogacy as legal and also that the surrogate child after birth would get their country’s citizenship. The Law Commission of India in its 228th Report on “Need for legislation to regulate assisted reproductive technology clinics as well as rights and obligations of parties to a surrogacy,” has by and large supported surrogacy in India, but is not favourable towards commercial surrogacy. The Commission said, “It seems that wombs in India are on rent, which translates into babies for foreigners and dollars for Indian surrogate mothers.”

But according to an infertility specialist in Mumbai the Commission favouring altruistic surrogacy only may not be the solution either. “It will be very difficult to get altruistic surrogates and relatives could end up being pressured to become surrogates,” says the specialist. This could be a reality in view of poverty, illiteracy and the lack of power that women have over their own lives in India.
But many legal experts are of the view that the draft Bill is a step in right direction as it will end the present confusion and help regulate the functioning of the IVF centers and ensure quality check and accountability of ART clinics. It is expected to protect the interests of both the surrogate mother and child and help the commissioning parents to realize their dream of having their own baby more or less hassle free.

There are worries too as to what impact it will have on the society in terms of commercialization. Poor illiterate Indian women with the lure of money could be forced into repeated surrogate pregnancies risking their lives. There are also ethical and moral issues as well as the human dignity involved besides questions about the rights of surrogate mother. As such the draft legislation on surrogacy needs to be debated threadbare in social, legal and political circles as well as by the civil society before it becomes a law.

Disclaimer: The views expressed by the author in this feature are entirely his own and do not necessarily reflect the views of PIB or WBRi.


Source: http://www.washingtonbanglaradio.com/content/52569911-regulation-surrogate-parenthood-india
Forget yourself for others, and others will never forget you.
Posted by Sailesh Mishra at 4:54 PM No comments:

I believe: Forget yourself for others, and others will never forget you. I have Experience in the corporate sector for 15 years and 3 years in social sector. I have Desire to work for others,to gain more Experience and knowledge.Iam also open to learning and have passion to work for Elders and to do something for underprivileged childrens. My ambition is to start my own organisation which will work in social sector and would make positive contribution to the society and the nation.

Love to All
Sailesh Mishra

People for Social Cause Headline Animator

Click to join "People for Social Cause" Yahoo Group

Sailesh Mishra
Mumbai, Maharashtra, India
I believe: Forget yourself for others, and others will never forget you. I have Experience in the corporate sector for 15 years and 3 years in social sector. I have Desire to work for others,to gain more Experience and knowledge.Iam also open to learning and have passion to work for Elders and to do something for underprivileged childrens. My ambition is to start my own organisation which will work in social sector and would make postive contribution to the society and the nation. On 10th April 2008 launched www.silverinnings.com a dedicated and most comprehensive website for senior citizens and Founded Not for Profit Organisation ''Silver Inning Foundation'' for Elderly and their family members.

People for Social Cause Blog

The health news headlines shown above are provided courtesy of Medical News Today.

The content of this Blog, including text, graphics, images, information are intended for General Informational purposes only.People for Social Cause Blog is not responsible for, and expressly disclaims all liability for, damages of any kind arising out of use, reference to, or reliance on any information contained within the site. While the information contained within the site is periodically updated, no guarantee is given that the information provided in this Web site is correct, complete, and up-to-date.The links provided on this Blog do not imply any official endorsement of, or responsibility for, the opinions, data, or products available at these locations. It is also the user’s responsibility to take precautionary steps to ensure that information accessed at or downloaded from this or linked sites is free of viruses, worms, or other potentially destructive software programs.All links from this Blog are provided for information and convenience only. We cannot accept responsibility for sites linked to, or the information found there. A link does not imply an endorsement of a site; likewise, not linking to a particular site does not imply lack of endorsement.We do not accept responsibility for any loss, damage or expense resulting from the use of this information.Opinions expressed by contributors through discussion on the various issues are not necessarily those of People for Social Cause Blog.